Welcome To Q Research General== ”’We hold these truths to be self-evident: that all men are created equal; that they are endowed by their Creator with certain unalienable rights; that among these are life, liberty, and the pursuit of happiness.”’ Q Research supports attacking terrible ideas with better ones. 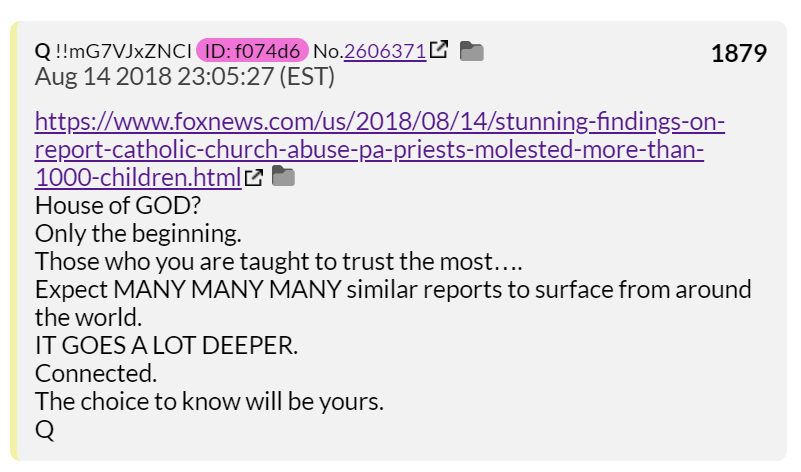 Q starts this post by referencing a Fox News Article shown below:

Hundreds of priests were said to have molested more than 1,000 children – and possibly many more – since the 1940s, and senior church officials, including a man who is now the archbishop of Washington, D.C., allegedly covered up the abuse, according to a grand jury report released Tuesday.

He then tells us that MANY MANY MANY more SIMILAR reports would surface FROM AROUND THE WORLD.  Here are a few:

Accusations of wide-ranging abuse in Catholic institutions in Ireland, including but not limited to the sexual targeting of children by priests, date back several decades. In a sign of the scale of the abuse, 14,500 people applied for compensation through an Irish government scheme for those abused at juvenile facilities run by religious groups between 1936 and 1970.

A lawsuit filed by a former associate pastor at an Ohio megachurch claims televangelist Ernest Angley sexually abused and harassed him over a 10-year period starting in 2004. The allegations detailed in a complaint filed Wednesday in Akron by Brock Miller, of Myrtle Beach, South Carolina, were previously reported by the Akron Beacon Journal in January.

Clerical abuse survivor Colm O’Gorman has described the speech by Pope Francis at Dublin Castle as an “incredible missed opportunity”. Speaking after he attended the civic reception for the Pontiff, Mr Gorman said: “It is staggering to me that in 2018 we are still asking a Pope to take responsibility, not for his own actions necessarily but for the actions of the institution that he heads.

A Catholic priest in Dallas who has been accused of molesting young boys and stealing from the parish has disappeared, church officials announced. Rev. Edmundo Paredes, a longtime pastor at St. Cecilia Catholic Church, is accused of having molested teenage boys – an allegation Dallas police have found to be credible, Bishop Edward Burns, of the Dallas diocese, said.

Illinois’ attorney general is planning to meet with Chicago Archdiocese officials to discuss seven priests with links to the state who were included in a scathing Pennsylvania grand jury report on clergy sex abuse.

Missouri Attorney General Josh Hawley announced Thursday an investigation into clergy sex crimes within the Roman Catholic Church. The state’s top attorney will be given “unfettered” access to the records of the Archdiocese of St. Louis, Archbishop Robert Carlson said shortly after Hawley’s announcement. “Anything that we have we will turn over,” Carlson said.

DUBLIN-Swimming against the tide of promises to crack down on abuse and cover-up led by Pope Francis, a newly created Mexican cardinal said that some accusers should be “ashamed” to point their finger at clerics because many of them have skeletons in their own closets.

I will continue to monitor these stories and will update this article accordingly.
“THE CHOICE TO KNOW WILL BE YOURS” ~ QAnon

Wray – TRUST BUT VERIFY! Rosenstein and Wray BOTH on Lindsay Graham’s Ra…

ALL links for CIR