Posts 2382-2384     November 1, 2018
VIDEO AT THE BOTTOM OF THIS POST
I was fast asleep last night (yeah, it was early lol), and my husband Jim runs downstairs and wakes me up.  I’m like what the…?  I thought something was really wrong, but then he asks me if I have seen the latest Q Posts.
I sat straight up on the couch, still in la la land and as I tried to focus and wake up, I realized he was telling me that Q had posted.  I was not expecting that at all.  So I got up, made coffee and headed straight to the computer. We looked at the Q posts and then Jim went back to bed.
I then went straight to my discord group, where, to my surprise, everyone was gathered already.  We were so excited and giddy.
Shout out to the discord family…..you guys rock!
I really was not expecting Q to post until after the midterms, but I am so glad they did! We had 23 days of darkness.  23? 23.  Remember that number.
So, most of you know by now that Trello deleted my boards and I have been working on a new WordPress website since this one is owned by Google and I don’t want to take the chance of anything further being deleted.  The new website is under construction, so until it is ready I will break down the new Q posts here and then make the video from the info I add here.
Here we go…..
Remember this post where Q revealed that his password was “cracked” and then he revealed that it was on purpose?

The last post by Q was made on October 9, 2018 and then 23 days later he/they post again!!!
Some of the anons referred to this and provided this graphic to explain this trip change if you forgot.

There has been, in the past, lots of speculation about this, but I think there are multiple meanings and the 23 days of darkness may be one of them.
NOW COMES THE PAIN.

Oh yea!  Q is real frens!  lol
Alright, so onto the first post:

Q is confirming what I said in my previous 2 videos about the Hatch Act.  Most anons were on the same page about this, so it was a nice confirmation.
If you missed the explanation, you can watch here:

I will provide a review of the “POLL” drops in the video for this set of posts which will be located at the bottom of this post.  From now on, I will make a blog post and then use it to format the video.  I know it is a change from the Trello board, but what can a girl do when she is censored?  FIND ANOTHER WAY AROUND.  And that is what I intend to do!
Moving on…
The basic gist of reviewing the Poll drops is to remind us that ….THEY LIE!  They are #FakeNewsLies.  POTUS and his team are in control and THEY know the real numbers.  Just look at the rallies and the crowds.  Do they really think we are this dumb? 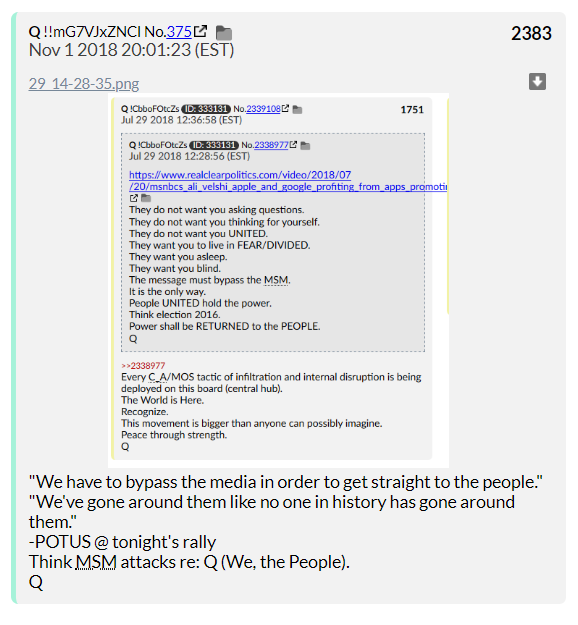 Q Quotes from the Rally here:  I have it set to the right timing for you….
The Q TEAM went around the MSM by using QANON!!!!!!!!!!!!!!!!!!!!! woo hooooo
This is why Q has been attacked so much in the MSM…all for a larp?  I think NOT.
Did you catch the Guantanamo Bay reference last night?  Here it is if you missed it:
If we have defeated ISIS and things are wrapping up in IRAQ, AFGHANISTAN, AND SYRIA…WHY WOULD WE KEEP IT OPEN?  I suppose someone could argue, IRAN could be an answer and their proxy boys, Hezbollah, but that is not what I am thinking.

Ahhhh the thought of this…makes my heart sing! 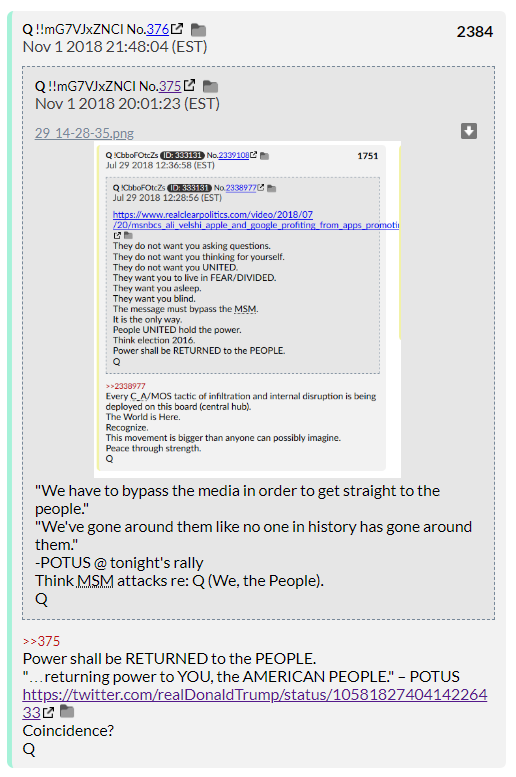 Beautiful evening at a #MAGARally with great American Patriots. Loyal citizens like you helped build this Country and together, we are taking back this Country – returning power to YOU, the AMERICAN PEOPLE. Get out and https://t.co/0pWiwCHGbh! https://t.co/9nCTLdFVW4 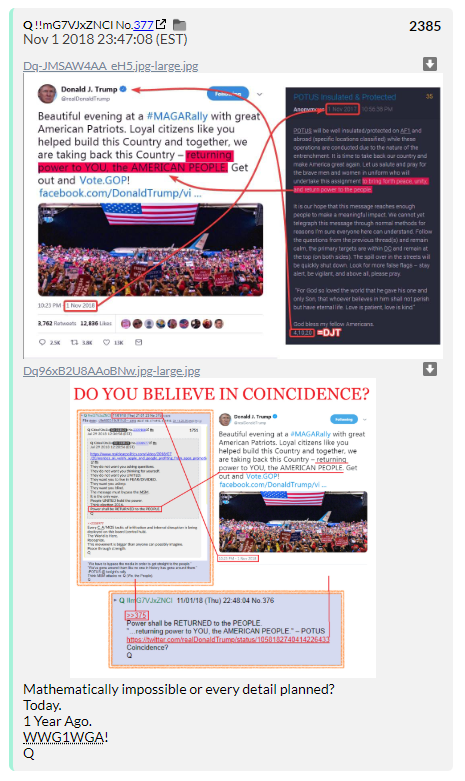 ONE YEAR AGO!  Everything is planned! EVERY DETAIL!  No, sir, NOT a coincidence!

Our POTUS not only told us about what he was going to do to transfer power back to the AMERICAN PEOPLE on the campaign trail but also from DAY 1 at His inaugural speech from January 2017, doesn’t it?  Listen:

My video for this blog post will be posted below after it is filmed!  I hope you like this new way of doing the breakdowns, and after GAB is back up, I may start posting more there too.  Pray for them. Looks like they might be back up and running this weekend?  Fingers crossed.
Thanks so much for reading my posts, I love you all!