QAnon – CONSTANT Attempts to SILENCE Q and Our Movement 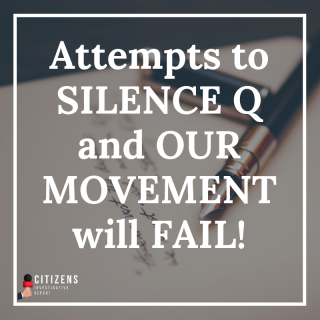 Q Posts 2386-2395    November 2, 2018
I believe that part of the reason Q was gone for so long recently, is due to the constant Deep State effort to silence Q and OUR movement.  And no, it cannot all be for a LARP!  The next set of posts contain a lot of proof to support this belief.
Post 2386 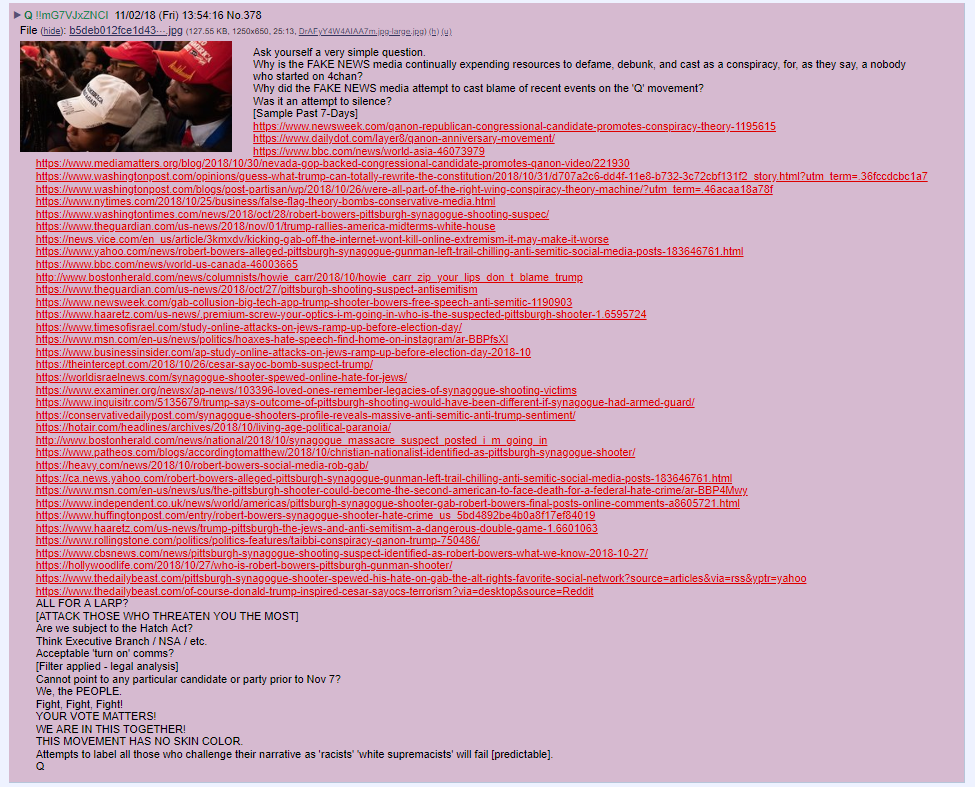 This is the video she tweeted, but that tweet has since been deleted….  SILENCED?
This was just ONE example of MANY!
If you read through those links in the above Q post, you will find that there is a HUGE attempt to discredit Q, our movement, and POTUS.  We are called every filthy name and our movement is being ridiculed, all in the attempt to SILENCE US!  This will NOT work, it will fail!

One year later, had the QAnon movement finally passed?

For a conspiracy theory that’s made it all the way to the White House, QAnon had an inauspicious start. But one year ago today, it kicked off.

“For a conspiracy theory that’s made it all the way to the White House, QAnon had an inauspicious start.

One year ago today, the post that introduced the world to the supposed anonymous Donald Trump insider who calls himself “Q” was just one out of thousands on the 4chan message board /pol/. It was indistinguishable from the rest of the noise, a torrent of racist rants and memes.

But something about this one particular post stood out. It was the first of well over 2,000 from the poster who soon went by “Q Clearance Patriot.”

You get the idea.  Make us look so stupid and silly that we SHUT UP!

It takes a lot of money to debunk this movement and try to blame every incident and attack that happens on POTUS and Q.  Why so much money being spent on a Larp or a NOBODY, as Q puts it?

Ask yourself that question.

Q asks if they are subject to the Hatch Act?  Think NSA/Executive Branch?

Q then tells us that this has been legally vetted and they know what they can say and how NOT to violate the act.

Let’s look at another Q post, out of order, to find out what happened there. 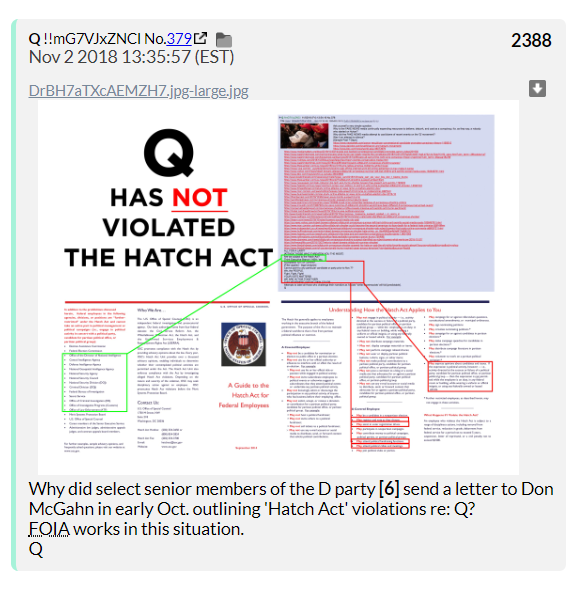 So, Q is telling us that the letter was sent OUTLINING THE ALLEGED VIOLATIONS that these 6 D’s asked WH Council about re: VIOLATIONS by Q.

Who are they?  Where is this letter?

Q then tells us that they are obtainable by FOIA – that FOIA will work for this situation!

Everyone CAN DO SOMETHING HERE!!!   Tweet to @JudicialWatch and ask them to file the FOIA! ASAP!  Link below:

@JudicialWatch Will you FOIA this for the AMERICAN PEOPLE? Please and Thank you! Please everyone retweet to JW and thank you! pic.twitter.com/xXSP0Qwu29

Let’s find out who they are! 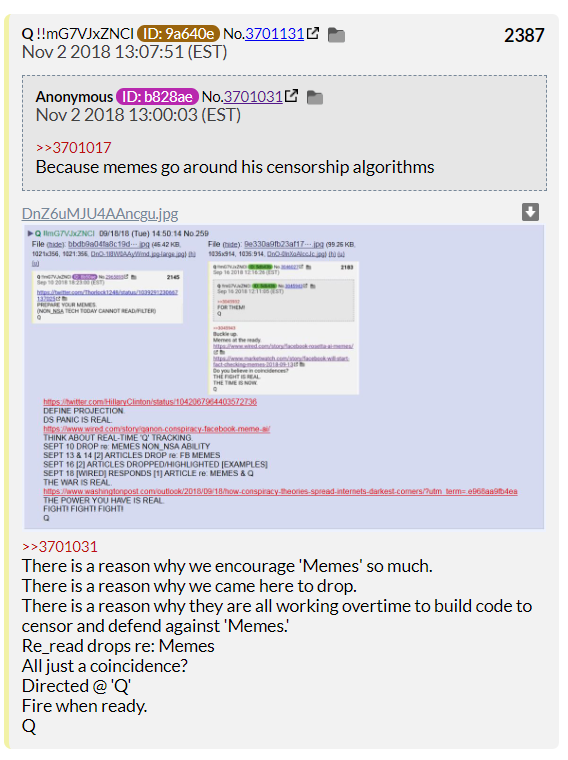 Any apps out there that allow you to take screenshots of text and then convert them to text?

Someone on this thread showed him how it can be done with an Android phone, but I guess that won’t work for his algorithms lol!

And to that Q says this is why we have the REAL POWER! 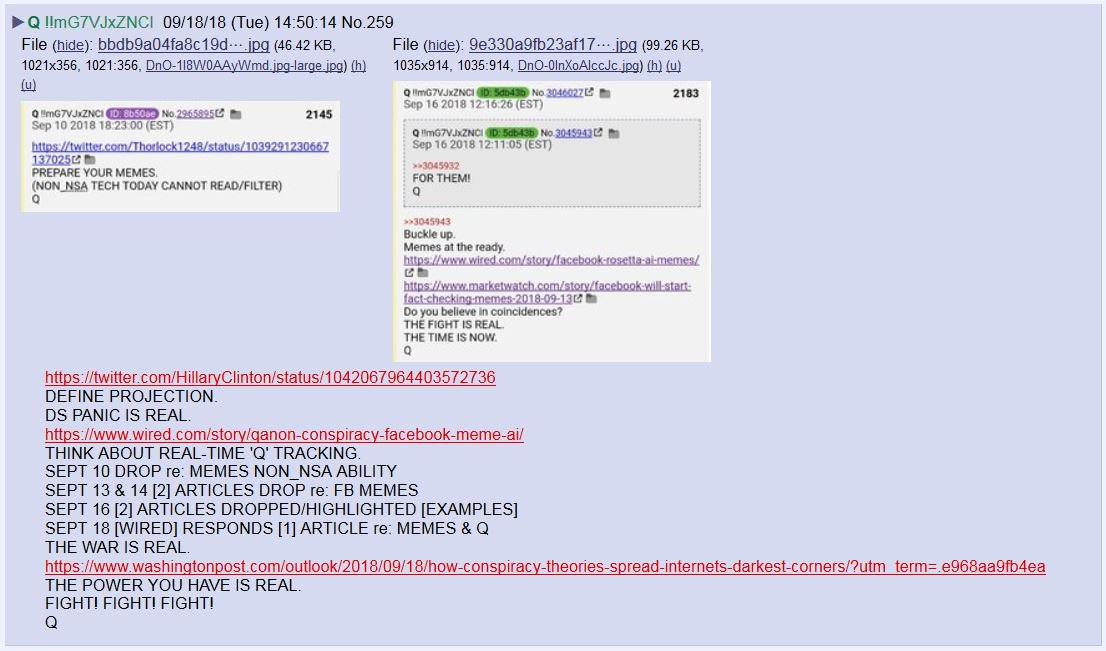 Meet This Year’s 25 Most Influential People on the Internet

From BTS to Ninja, TIME lists the 25 most influential people on the internet who had the most impact on social media and the news. 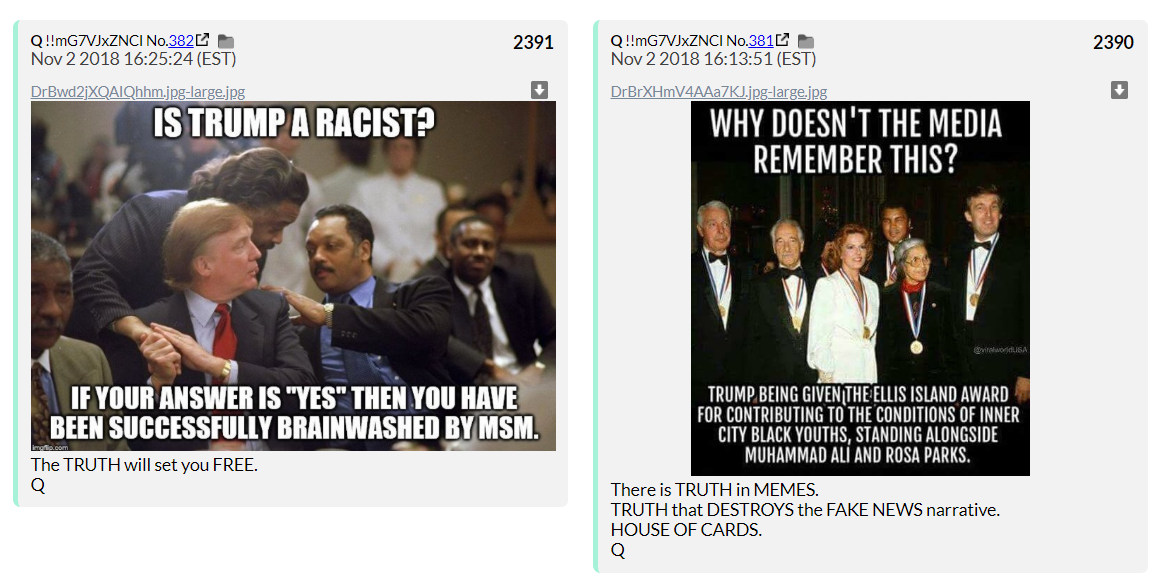 The Memes! The Truth in them…. FIRE AWAY!

An Extremely Detailed Map of the 2016 Presidential Election 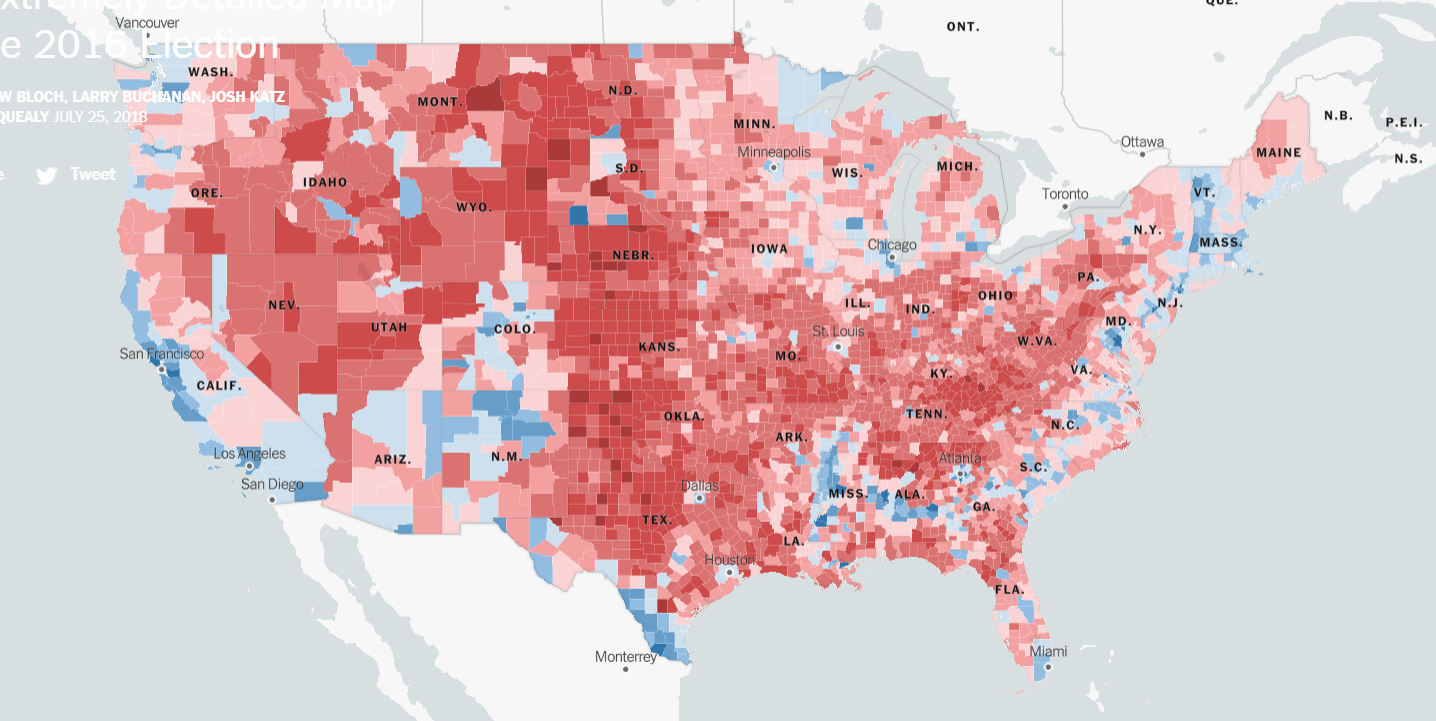 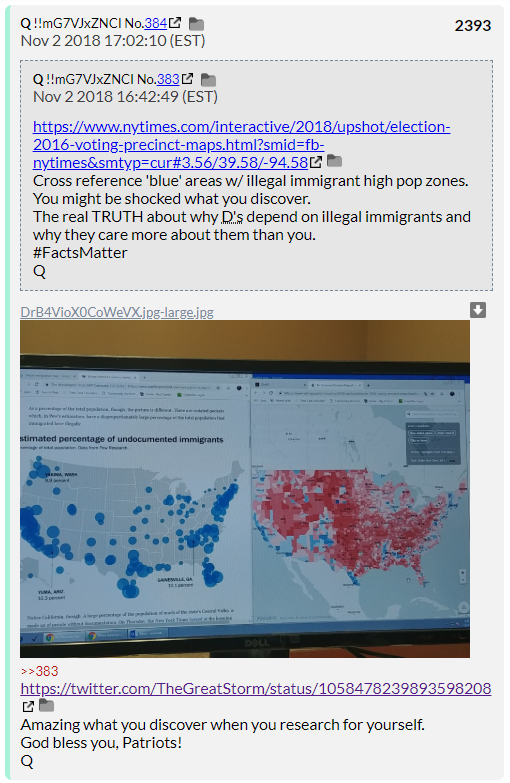 Oh, Senator Grassley, how you will be missed!!!!

Today, Chairman @ChuckGrassley referred Judy Munro-Leighton to @TheJusticeDept for investigation for making materially false statements to the Committee during the course of its investigation. https://t.co/pNfhLRnETy
— Senate Judiciary (@senjudiciary) November 2, 2018

Speaking tonight at the rally about Dems & why they want illegal aliens coming to our country, @realDonaldTrump said:

“What do they (Dems) REALLY want? They want them to VOTE!”

AND FINALLY, A LITTLE TREAT FROM THE ANONS ON 8 CHAN!  THANKS SO MUCH PATRIOTS!

Ok, guys!  That’s it for today and this will conclude November 2, 2018 posts by Q.  Thanks so much for reading my article.  As always, the video for this post is below or will be soon!
If you enjoy my work and would like to support me, here are the links.  Thank you so much to all of my supporters.  WWG1WGA!
Paypal https://paypal.me/MsKatieG
Patreon https://www.patreon.com/CitizensInvestigativeReport
Join Patreon for $5 or more per month and get access to my private discord as a reward!
Mail:
K. Griffith
PO BOX 18517
Fairfield, OH 45018