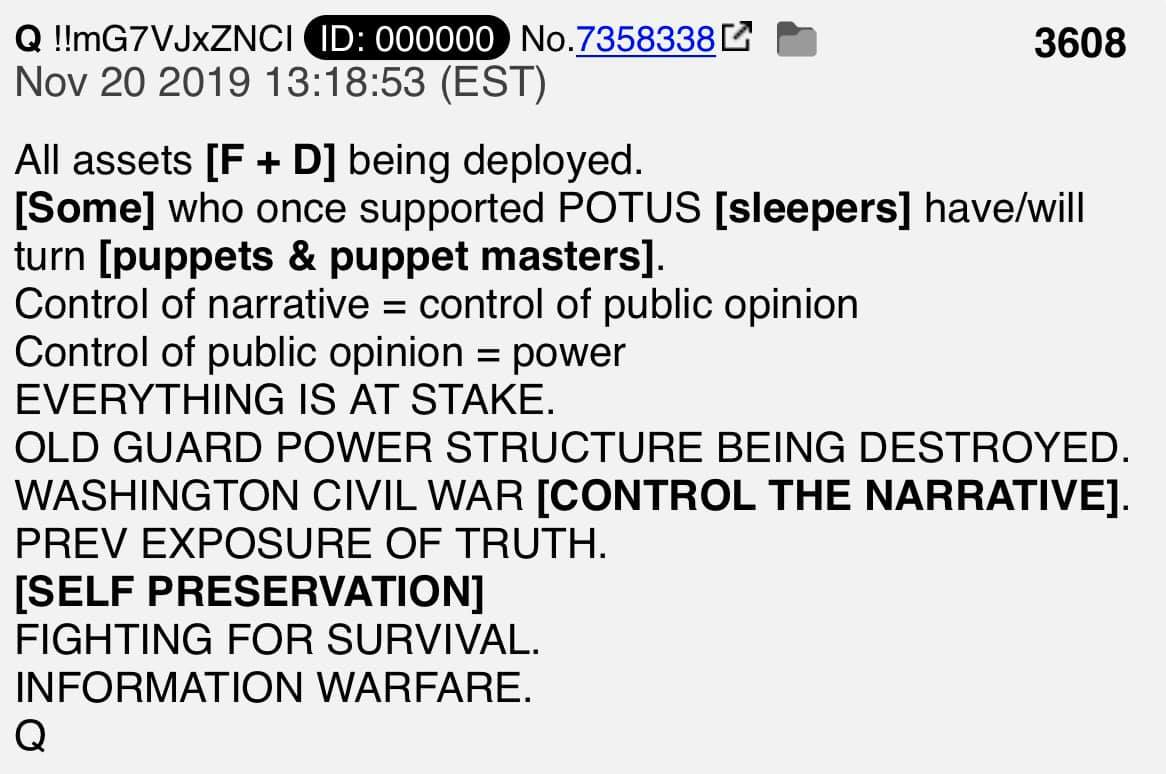 All assets [F + D] being deployed.
Foreign and Domestic

My Speculation on who those that “will turn”

President Trump is speaking about Sec. Pompeo in these tweets.

It would be really great if the people within the Trump Administration, all well-meaning and good (I hope!), could stop hiring Never Trumpers, who are worse than the Do Nothing Democrats. Nothing good will ever come from them!

Fake News NBC and all other Lame Stream Media Reports:

The impeachment inquiry has created the first rift between President Donald Trump and the Cabinet member who has been his closest ally, Secretary of State Mike Pompeo, according to four current and former senior administration officials.

Trump has fumed for weeks that Pompeo is responsible for hiring State Department officials whose congressional testimony threatens to bring down his presidency, the officials said. The president confronted Pompeo about the officials — and what he believed was a lackluster effort by the secretary of state to block their testimony — during lunch at the White House on Oct. 29, those familiar with the matter said.

Notice that Trump/Pence 2020 is missing from the rally signs: 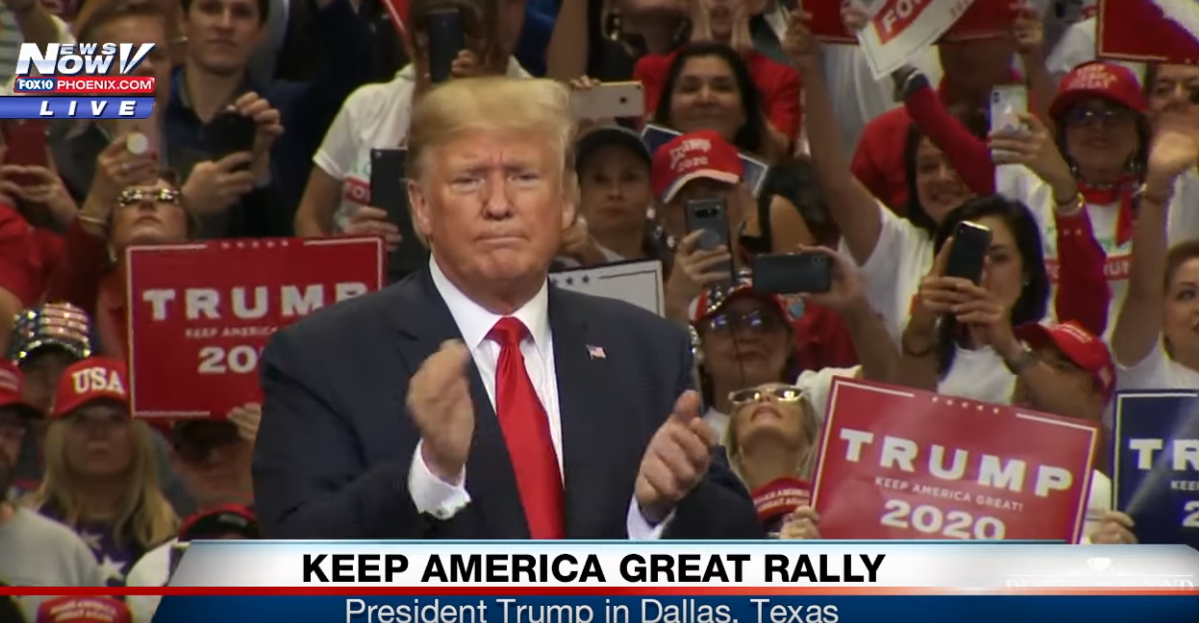 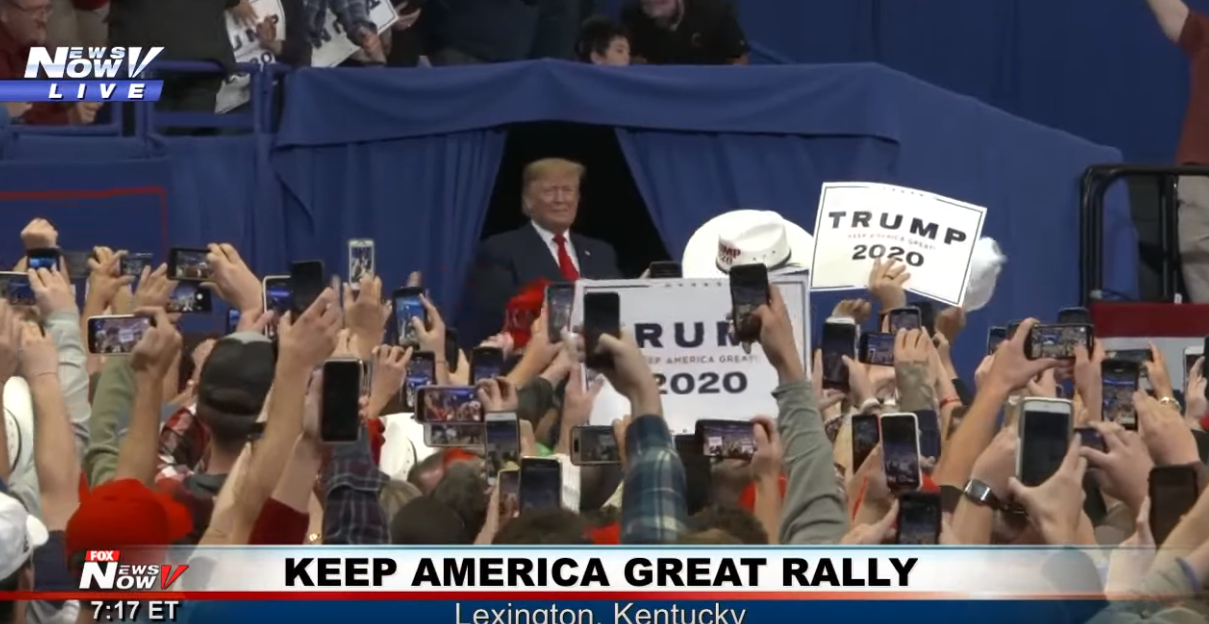 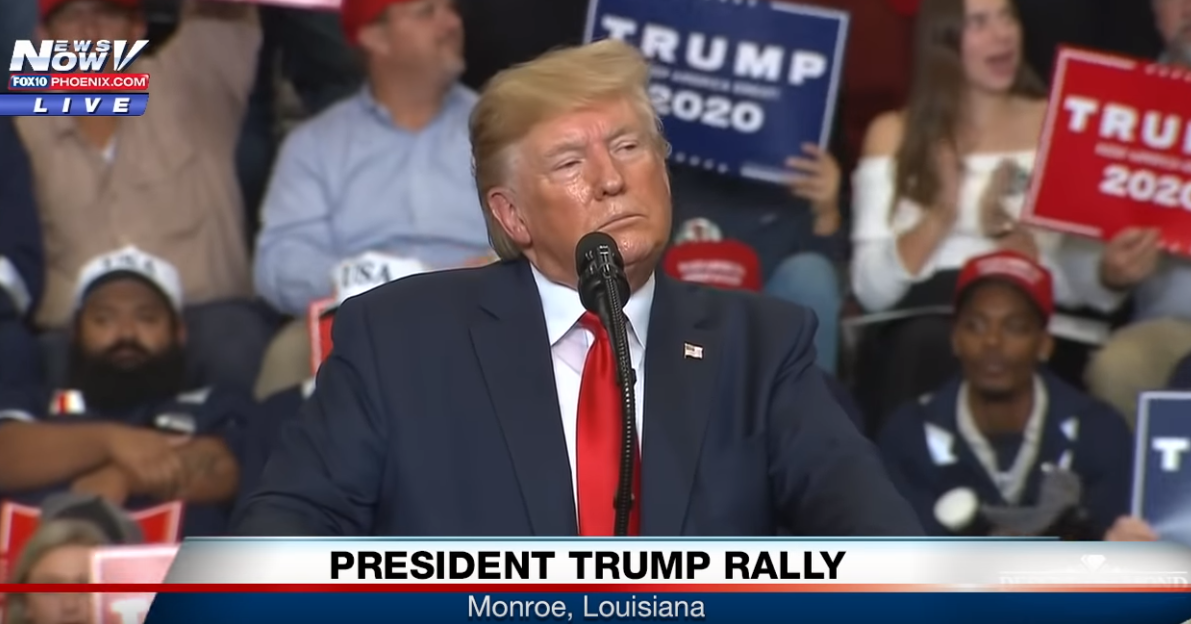 I wonder why Pence is missing on the stump signs? This has had me puzzled for months.

Then, I listened to a podcast from Sara A. Carter and this kind of blew my mind… LISTEN:

I have been wondering for years if VP Pence was part of the set up of Flynn from the beginning.  Sidney Powell will get to the bottom of it.  You can listen to the full podcast at saraacarter.com 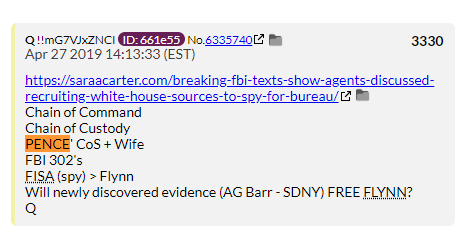 VP Pence Chief of Staff + wife were spies in the WH on the behest of Peter Strozk.  302’s were modified, which allowed for a FISA on Flynn.

I wonder if the following article is related to FLYNN and VP PENCE?  Remember that the Carter Page FISA/Investigation had a scope memo from Rosenstein that has been revealed to be about FLYNN! *DEEP DIVE*

From the Washington Times

The FBI Lawyer in question is Kevin Clinesmith.  Let that sink in: 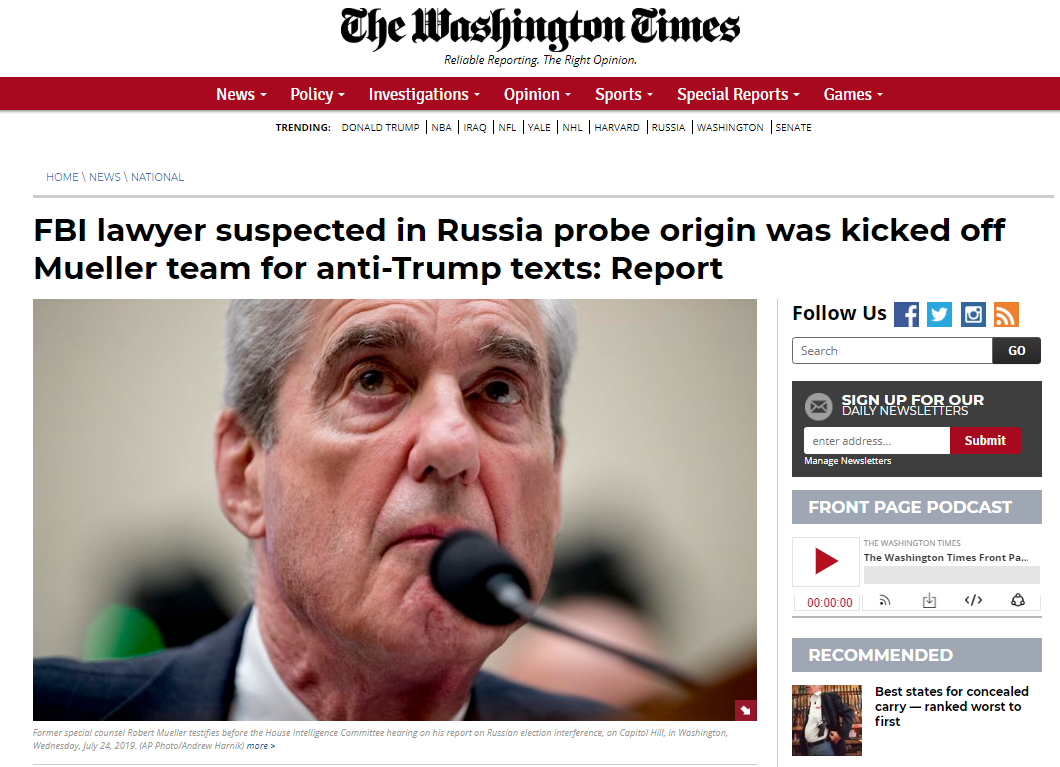 The FBI lawyer under criminal investigation for allegedly altering a document connected to the surveillance of a Trump adviser was kicked off ex-special counsel Robert Mueller’s team for anti-Trump texts, according to a report Friday.

The New York Times identified Kevin Clinesmith as the former FBI attorney under investigation by U.S. Attorney John Durham, who is probing the origins of the Russia probe.

It was reported Thursday that Mr. Durham is probing whether an FBI lawyer falsified an email that was used to obtain a Foreign Intelligence Surveillance Court warrant to surveil Mr. Page.

Mr. Clinesmith was the primary FBI attorney assigned to the Russia probe in 2017. He also served with the FBI’s National Security and Cyber Law Branch. He left the bureau two months ago after he was interviewed by Justice Department Inspector General Michael Horowitz.

The allegedly altered document was uncovered in Mr. Horowitz’s probe into whether the FBI abused its power when it applied for the FISA warrant.

REMEMBER:  All of this Flynn Activity and the changing of 302’s and emails were all occurring at the same time, which led to the set up of Flynn.  These sick people are all working in unison.  Was VP Pence part of this coup attempt on FLYNN?

We could know if Fake News Media puppets would ask the questions! 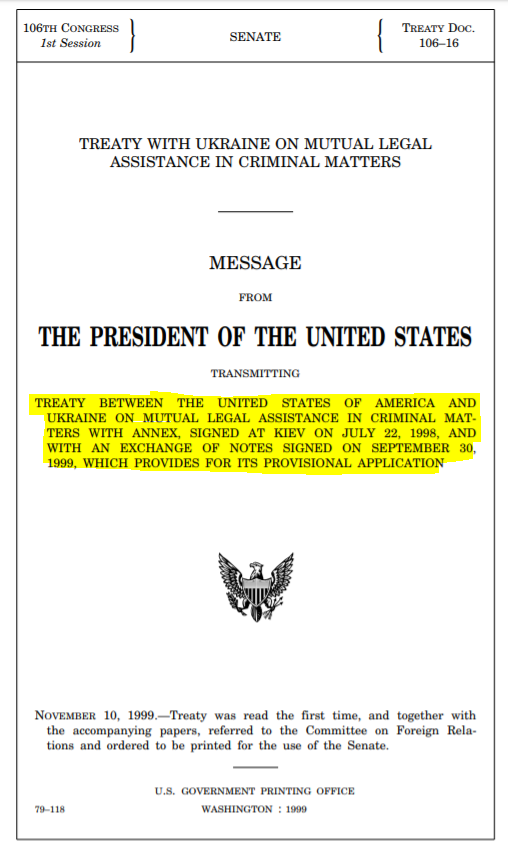 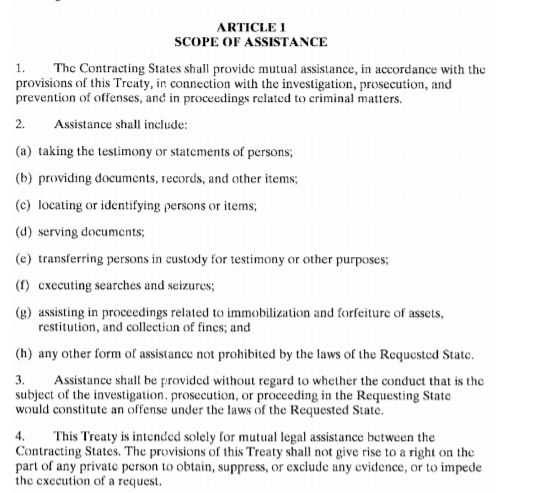 On the July 25, 2019 call, President Trump asked the President of Ukraine Zelinsky to work with AG Barr on corruption (Biden, Crowdstrike, etc).  He had every right to according to this 1998 Treaty.  These people are stupid!

@BreakingNLive just got their account suspended after posting this story: pic.twitter.com/hfsizcnt04 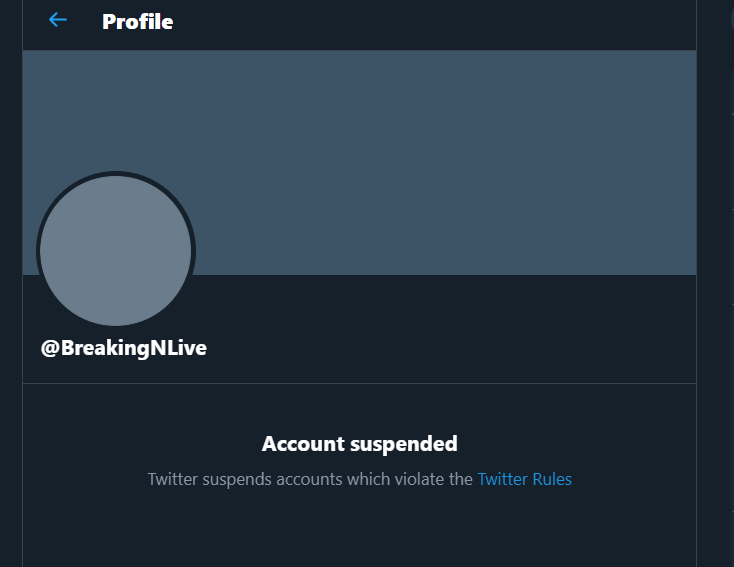 They need censorship to control the narrative.

The WikiLeaks players in the email listed above from Q: 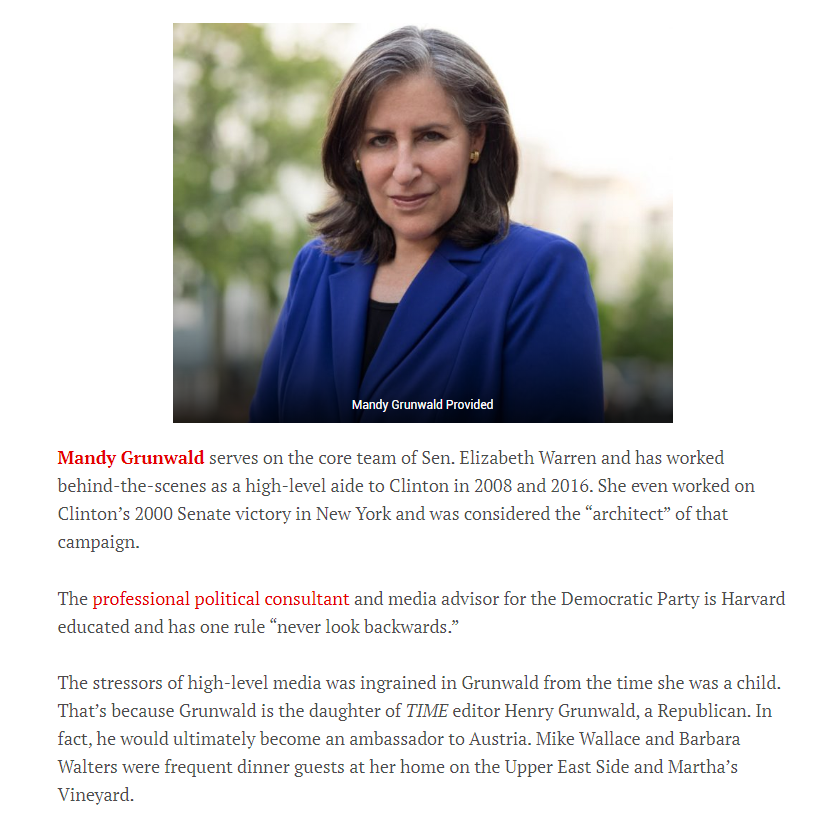 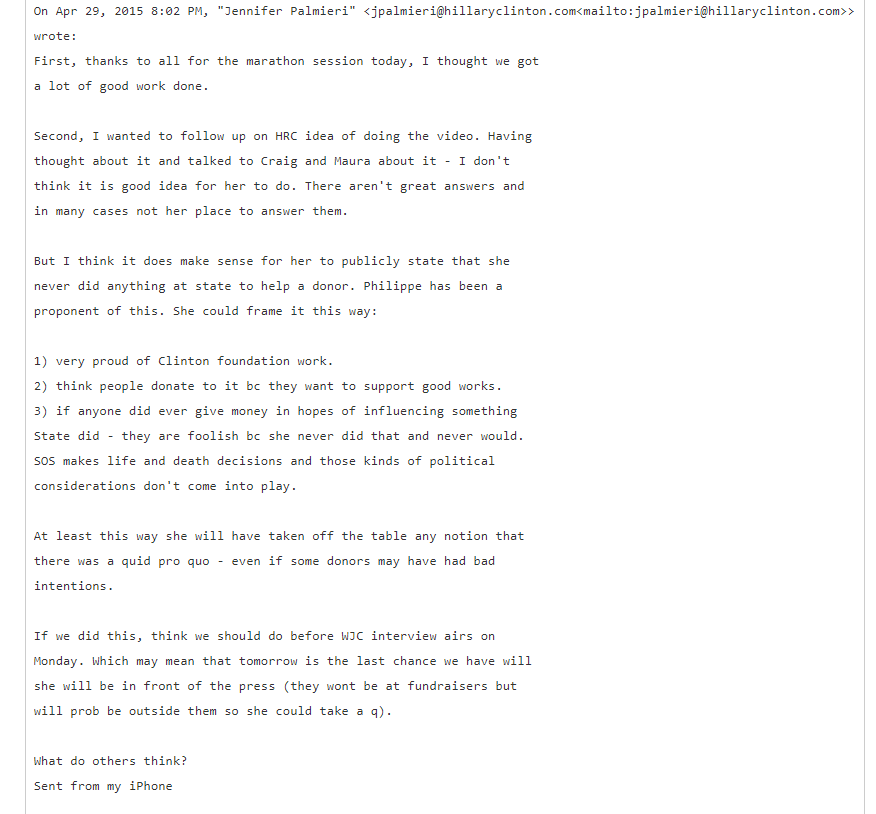 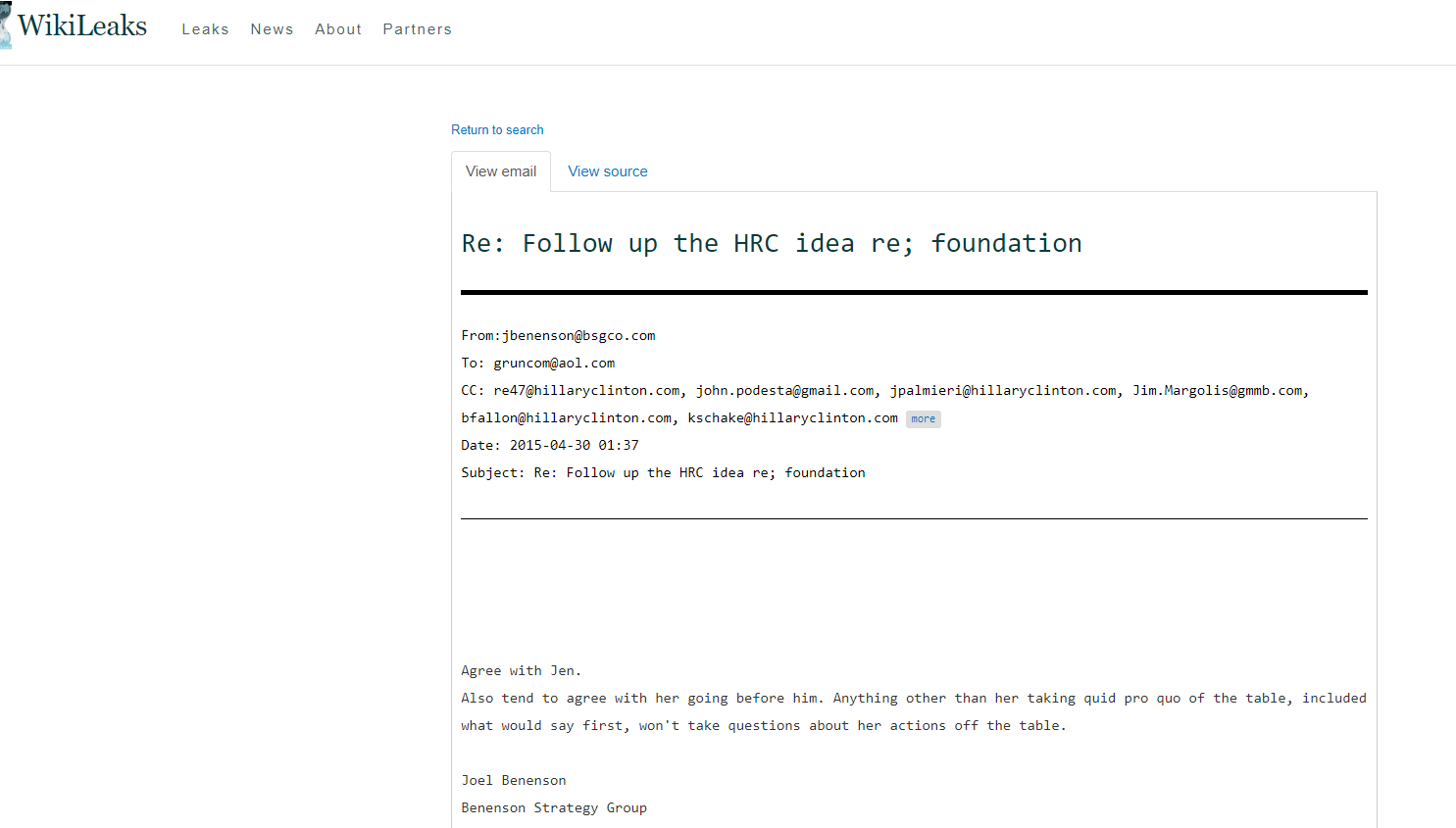 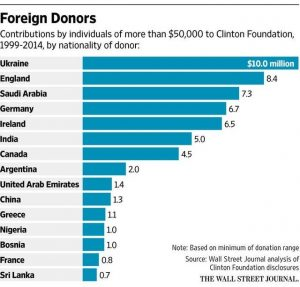 Yep, it’s a fact and later, we will dive further into this. 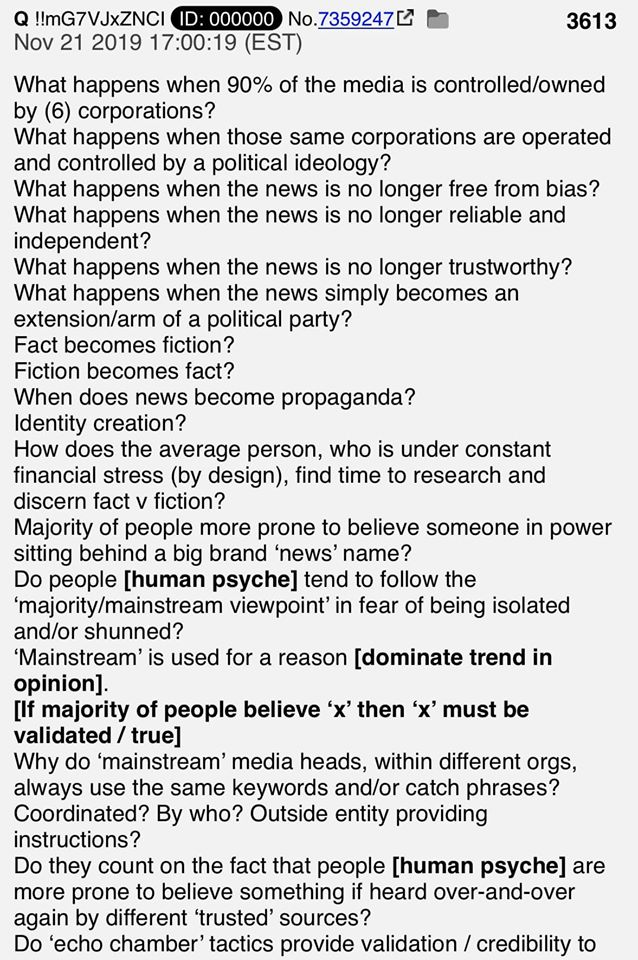 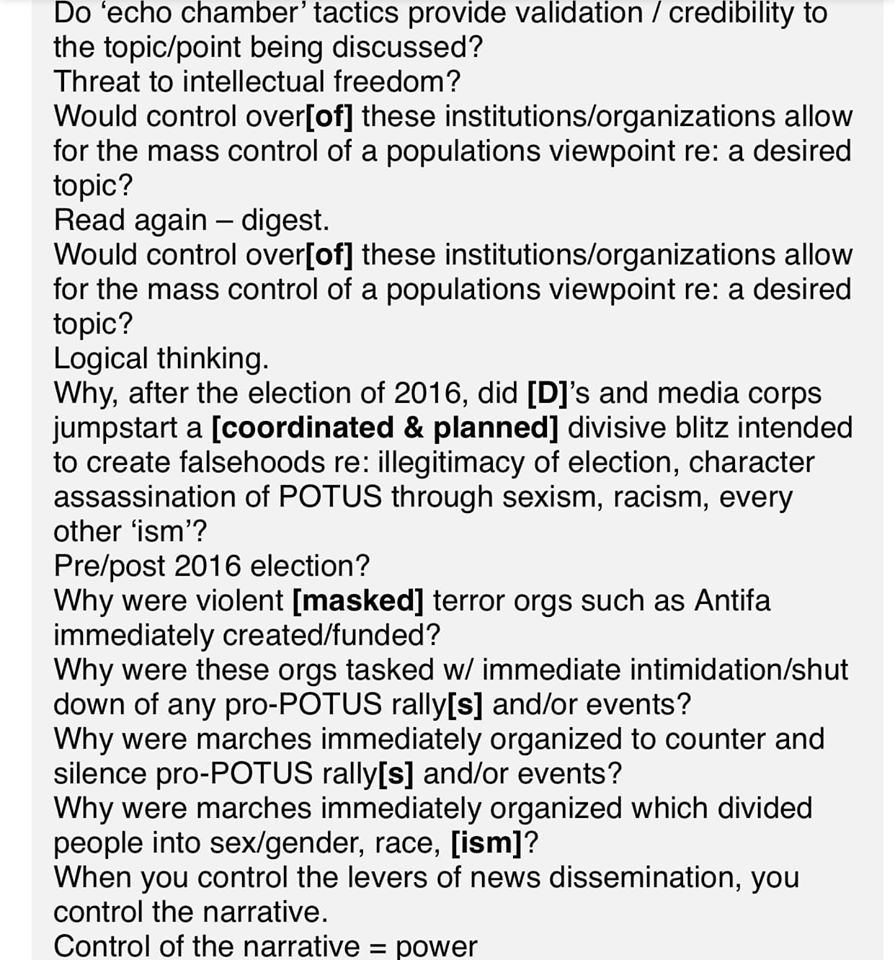 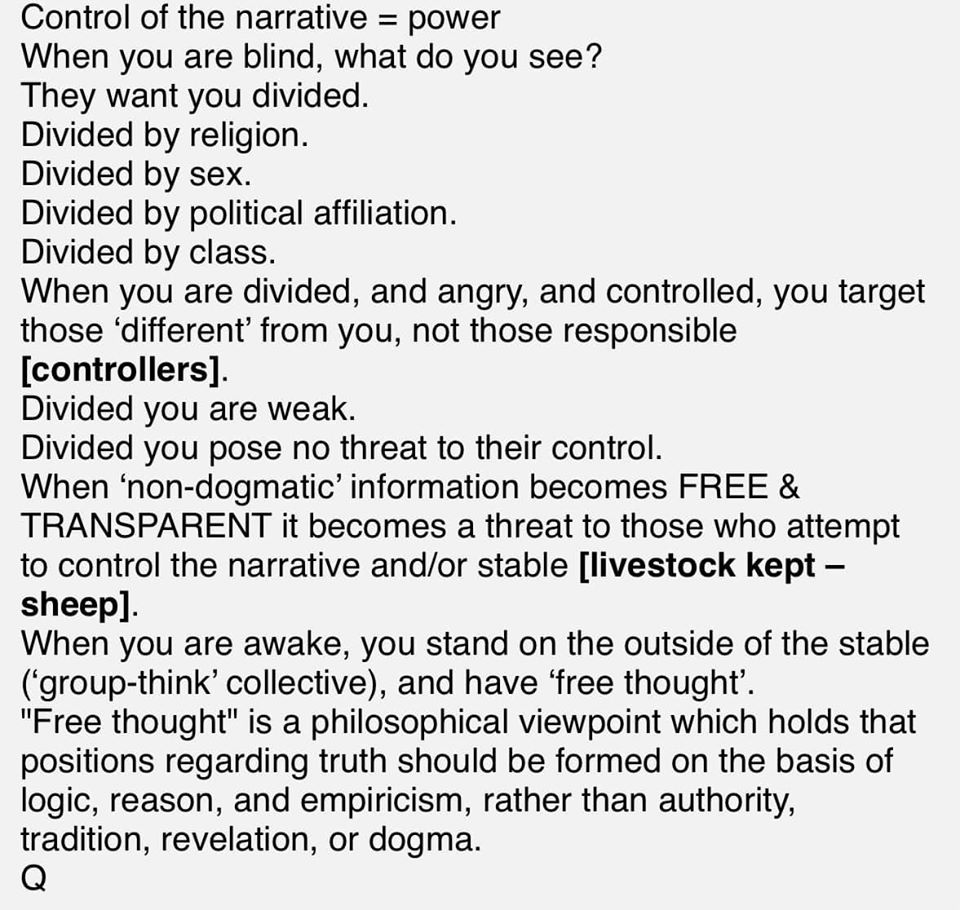 For more on this topic, check out my last article.  I discuss the [D][1-6] quote from Q and how I felt it was related to 6 corporations that own the Media and the Dem party.  It seems I was right!  LOL

This is an example of INFORMATION WARFARE demonstrated by the media arm of the D party.

YES!  FAKE NEWS is extremely dangerous to our democracy!

Fisa is the Start. #FISAgate #FISA #ImpeachmentHearings @DemonteAnna Here you go! #Qanon #QArmy
The A Team = Schiff, Dems and The Mainstream Media
The Q Team. WE THE PEOPLE. pic.twitter.com/asOCGZtiOO

A video game of WE THE PEOPLE vs. THE SWAMP
and Q says: Game over! lol!

Saw this on the way home today coming home from Chicago during rush hour….amazing how many people honked….. pic.twitter.com/XFRo33nVZW

FBI 302’s modified
We knew this a long time ago…

Vindictive Vindman is the “whistleblower’s” handler. 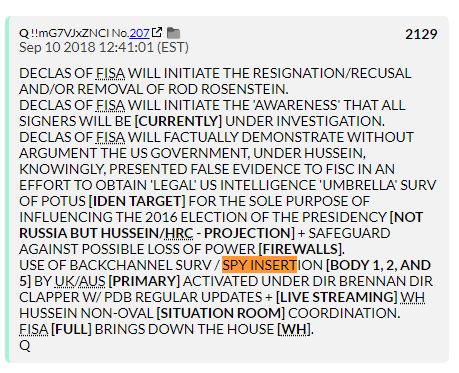 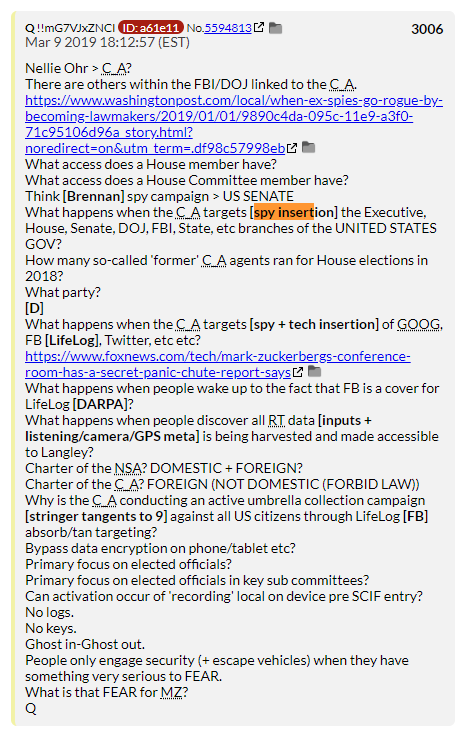 And calls out the Ukraine “Whistleblower” 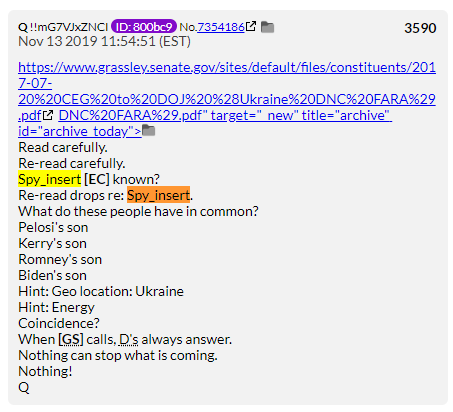 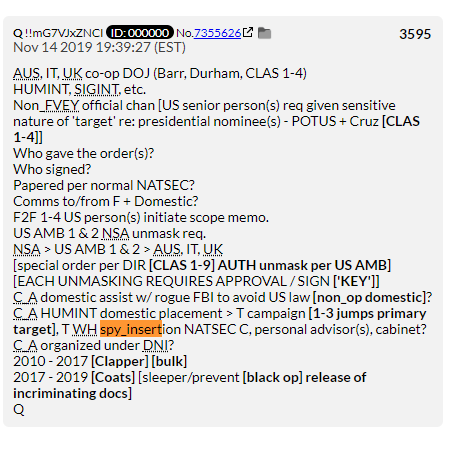 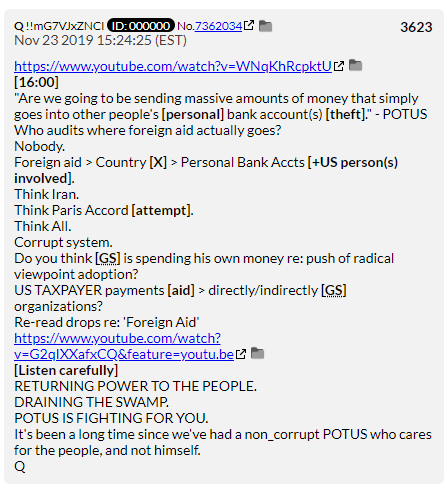 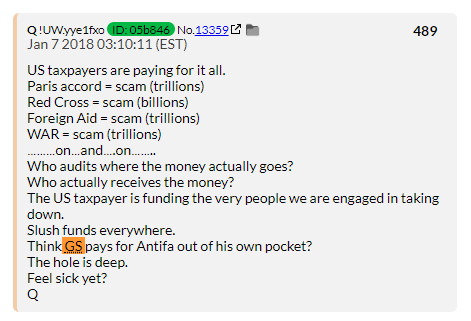 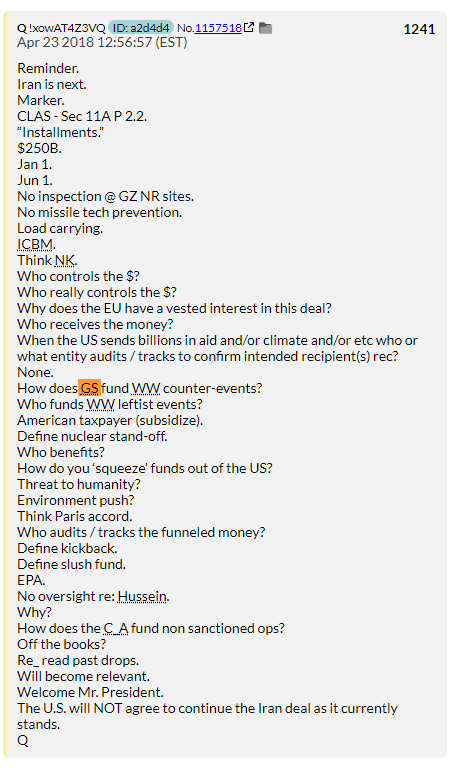 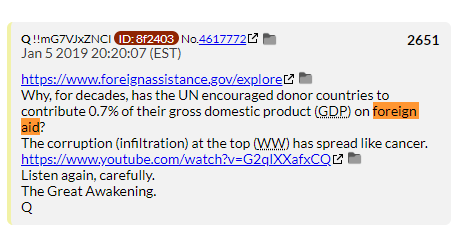 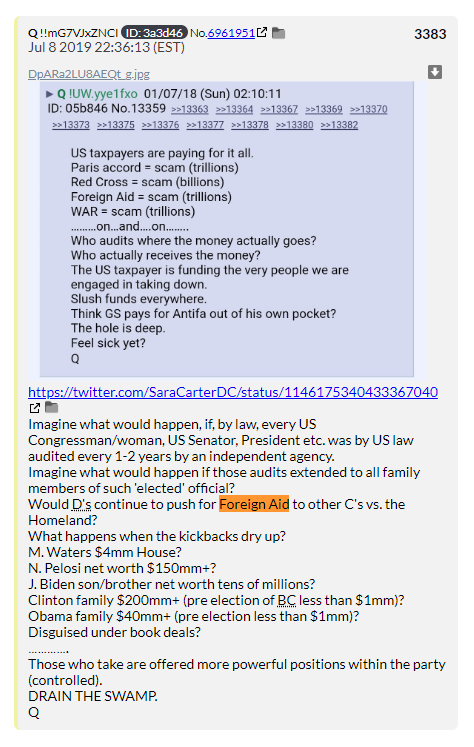 WHERE IS OUR MONEY:
In 2015 @BarackObama and @JoeBiden gave #EquatorialGuinea $4.4M in US Aid. In 2016 #Swiss Gov seized 25 supercars valued at $13M belonging to the son of President of EG. He is facing charges of #corruption & #moneylaundering *RETWEET* https://t.co/JBhSdS0Yei 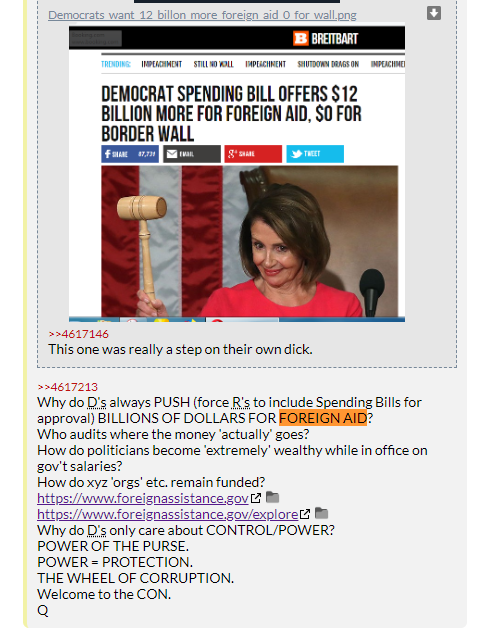 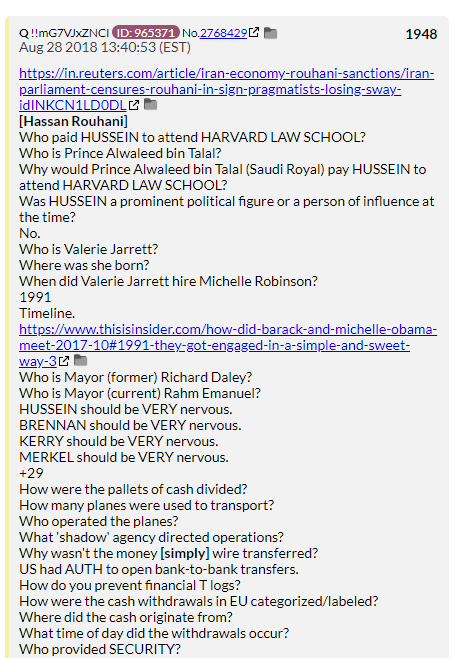 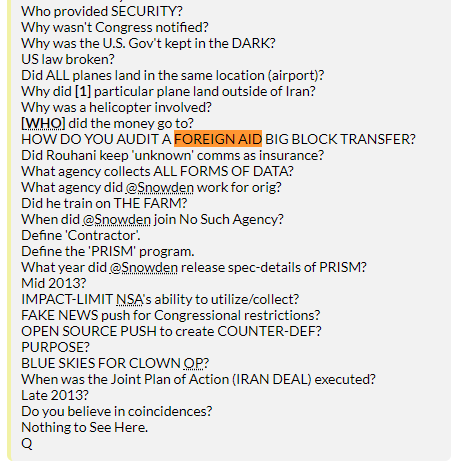 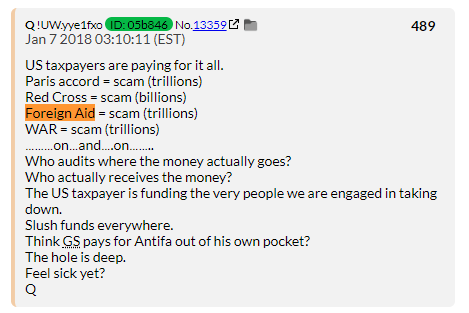 I discovered a pattern of corruption that the Washington press covered up for years!

I’m also going to bring out a massive pay-for-play scheme under the Obama Administration that will devastate the Democrat Party.

Do you honestly think I’m intimidated?

It’s HAPPENING…. and it is going to be:

Thanks for reading this article!  Please consider supporting my work by using the Patreon or Paypal buttons on the side of this website.  Thanks to all my current supporters!  I could NOT do this without you!